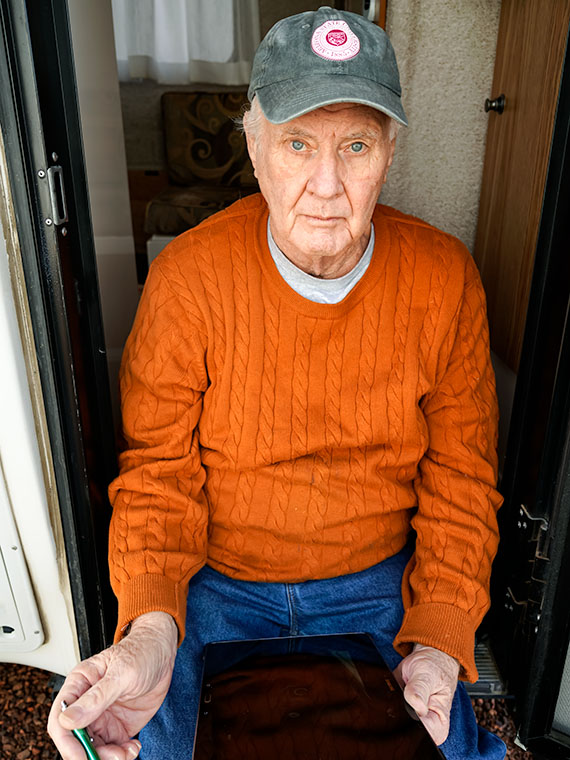 Jim was a long time resident of the Phoenix community ever since moving from California over forty years ago. After a rewarding computer career, he and his wife, Anne, retired to Congress where he can, at long last, focus on his love of photography and travel. His long Arizona residency has given him time to learn about the state’s complex geography, weather, flora and fauna.

As a child, he showed an aptitude for art, but it was in college that he picked up the camera and found his tool of self-expression. Although photography played second fiddle to academics, he signed up for photo classes when possible. After graduation, Jim continued his study of photography through workshops, seminars, books and (of course) the Internet. Jim has attended several portfolio reviews to get feedback and insight on his work from curators, publishers and fellow photographers.

Past Masters such as Ansel Adams, Eugène Atget, Edward Weston and Minor White influenced Jim’s style. Contemporary artists that Jim admires and gets inspiration from include John Sexton, Michael Kenna, Mitch Dobrowner and Joseph Holmes. He makes a point of studying contemporary artists to learn and improve upon his own technique.

Art galleries throughout Arizona have displayed Jim’s work, including those in Chandler, Cave Creek, Jerome and Mesa. He has participated in juried art festivals such as Tucson’s 4th Avenue Art Festival, Fountain Hills Festival of the Arts and Litchfield Park Art Festival, where his work was well received.

It’s taken a while to grow accustom to their new Congress surroundings. He suspended unpacking and organizing while he and Anne joined close friends on a summer long journey to Alaska; a trip of a lifetime. Now that the dust is settling, he has begun to clear his schedule to concentrate on creating new art. He has joined the Wickenburg Art Club to learn from their experiences and to share his knowledge when possible. He wants to take advantage of every chance to show his work to the public. There are several long-term projects that he plans on completing and assembling into shows and books. Jim has settled on a routine where he weekly adds a new image to this Website and a written story describing it's creation.

We hope you enjoy your visit and come back often.